The streak is over

97 points were not enough last night. An undermanned but rabid Chicago Bulls team played extremely well in Chicago to win 101-97 and stopped the Heat's winning streak at 27 in a row. Miami is now the proud owner of the second longest winning streak in NBA history. The focus is now to start a new streak and defend the title of NBA champions when the playoffs begin in April. Go Heat, we love you!
Posted by T. T. Douglas at 9:42 AM No comments:

Washing the saucepans-
the moon glows on her hands
in the shallow river.

This guy is a genius. Here is O, KY from Archer Prewitt. Enjoy and happy Friday.
Posted by T. T. Douglas at 5:11 AM No comments:

Citi will pay 730 million U.S. dollars to settle a class action suit by bondholders stemming from the financial crisis. The bondholders claimed that Citi misled them by misrepresenting its exposure to mortgage-backed assets as well as understating losses on loans. Citigroup denies the allegation but is settling to put the lawsuit behind it.
Posted by T. T. Douglas at 6:17 PM No comments:

And we all know what that means. Time for another MOTW, Manager of the Week. This week's offering is a skittish character who tends to be a freethinker. While this may be a good thing at times, long term this manager may not be a good bet to survive within the morass that is corporate inertia.
Posted by T. T. Douglas at 6:00 AM No comments:

Watches a lot of movies and television, especially fare that features rogue cops, vigilante citizens and/or general anti-establishment characters. Has a reputation for going against whatever corporate strategy, policy or procedure is mandated by Head Office. Working for Buck the Trend Manager can have serious and undesired, short-term repercussions for your career.
Posted by T. T. Douglas at 5:59 AM No comments:

That wren-
looking here, looking there.
You lose something?


I love Brazilian music. These three sound wonderful together. Here are Vinicius de Moraes, Toquinho and Maria Creuza singing Lamento No Morro. Enjoy and happy Friday.
Posted by T. T. Douglas at 5:12 AM No comments:


Check out this double behind the back move from the Minnesota Timberwolves Ricky Rubio. In all my years of watching professional basketball I can honestly say I have never seen a move like this. The Wolves waited a long time for Rubio to join their team, but you can see why they waited from this play. The Spaniard is a magician on the court, no two ways about it. It's wonderful to watch such a creative point guard play the game.
Posted by T. T. Douglas at 10:06 AM No comments:

Shout out to the Heat

They are sizzling. It wasn't easy, but last night on the tail end of a back to back, Miami defeated a cantankerous and scrappy Philadelphia Seventy-Sixers team 98 to 94 to extend their winning streak to 20 games. Way to go Heat! Keep it up.
Posted by T. T. Douglas at 9:28 AM No comments:

Agile Programming - for your family

During this TED talk Bruce Feiler explains the way his family has gone about using agile programming to lead a more balanced and less stressful family life. His chat makes a lot of sense and is quite eye-opening. As a parent you sometimes are too close to the rut you may have created and participate in during what can only be termed the most important responsibility you will have during your entire lifetime; raising your children.


Are you over 50 years old? You may need Old Glory insurance. I'm sure thinking about buying a policy, what with drones in the news all the time these days. Eat your heart out Rand Paul.
Posted by T. T. Douglas at 5:06 AM No comments: 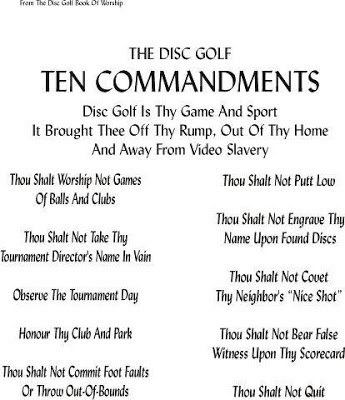 Of Disc Golf. These are divine rules people. I would add a local one which goes like this...

"Thou shalt be present on Sundays at 10:00 a.m. sharp for random draw doubles."

And we all know what that means. Time for another MOTW, Manager of the Week. What is it that many people in different parts of history said in their defense. "I was following orders." Well, this manager actually was.
Posted by T. T. Douglas at 6:00 AM No comments:


This manager survives by doing anything and everything Senior Management says without question. Lackey Manager’s silhouette has a distinct stooped contour to it from all the weight of nonsensical orders that he/she has complied with over the years. At home Lackey Manager’s spouse, children and even pets order him/her around with relative ease. When alone, Lackey Manager stills looks around at non-existent beings for permission before doing anything at all.
Posted by T. T. Douglas at 5:59 AM No comments:

Napped half the day;
no one
punished me!

Say It Ain't So

Here is Weezer performing Say It Ain't So. Enjoy and happy Friday.
Posted by T. T. Douglas at 5:11 AM No comments:

Death came looking for someone...

In the image death came looking for someone whose initials are F.C. but he got H.C. instead. Hugo Chavez is dead and it is time to reprise the image.
Posted by T. T. Douglas at 11:28 AM 1 comment:

Harlem Shake out of control

Doing the Harlem Shake on an airplane apparently did not go so well for the shakers and now it has gotten some Australian miners fired (15 of them) and banned for life from the mine.  What is it with these dance crazes that people feel they need to break out into dance at their jobs, in restricted areas, or just about anyplace where it is not appropriate? Whatever happened to dancing on the dance floor? Beats me.

Here is one writer's explanation for the phenomenon.
Posted by T. T. Douglas at 8:36 AM No comments:

And we all know what that means. Time for another MOTW, Manager of the Week. No one knows why the company employs this next manager, but then if they did, it wouldn't be a mystery now would it?
Posted by T. T. Douglas at 6:00 AM No comments:

A shadowy figure, Mysterious Manager comes in at odd hours and leaves at even odder ones. He/she sits in the corner office and spends a lot of time speaking on the phone in hushed tones. Is never observed going to lunch and when seen in the hall is jocular, but never really connects with anyone.
Posted by T. T. Douglas at 5:59 AM No comments:

Even considered
in the most favorable light,
he looks cold.

What day is it today?

Today is sequestration day and also palindrome day. For those of you that may not have paid attention that day in school a palindrome is a word, phrase or number which may be interpreted the same way backwards as forwards. When I learned it in school we were given the famous example of "Able was I ere I saw Elba."

I am not even going to try to explain sequestration beyond the fact that there will probably be a whole bunch of cuts to the federal budget. Depending on who you believe, either criminals will be running amok in the streets by first thing tomorrow morning along with many other "the sky is falling" type of repercussions, or, not much will change although people will feel the pinch eventually down the road.

I don't really know what to believe so let's just call it Palindrome Day since you can interpret the date the same way backwards and forwards, 3/1/13. Happy Palindrome Day everyone.
Posted by T. T. Douglas at 8:40 AM No comments:


Felt like getting a little rowdy today. Here is Violet by Hole. Whatever you make think of her, Courtney Love can rock with the best of them. Enjoy and happy Friday.
Posted by T. T. Douglas at 5:15 AM No comments: