Halestorm rocks!! I Miss the Misery

Liberando: Reflections of a reluctant warrior 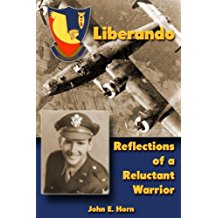 A friend of mine wrote this book and it is available on Amazon.com. The title of this book says it all. This book is about the author's father, who flew 50 bomber missions out of an airbase in Italy against the German war machine. He did it reluctantly but bravely, only wishing to come home in one piece to his family and resume his normal day to day life. The author also has combat air experience, having flown helicopters in the Vietnam conflict so his research, eye for detail, and singular writing style gives you a bird's eye view into one specific facet of the enormous devastating conflict which was the Second World War.

Such a unique account of what these bombing missions entailed should not be missed. It is a thoughtful and even-handed view of the bravery, effort and humanity of the crews involved in the air campaign against the Nazis. After having read this book I understand why these men and women have been referred to as the greatest generation.